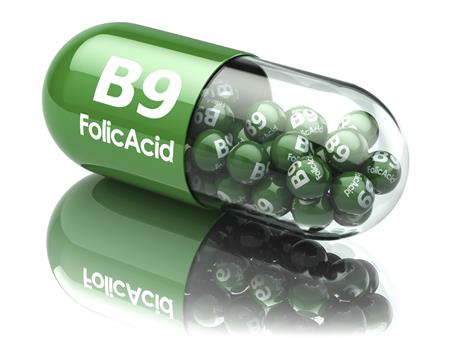 For synthesis and repair of DNA, both folate and B12 have pivotal roles in maintaining gene stability. Finally, folate is essential for the formation of red and white blood cells in the bone marrow and for their maturation and is a single­carbon carrier in the formation of heme. The role of folate in normal cell division makes it particularly important in embryogenesis. Periconceptual folate supplementation can reduce the risk of serious birth defects, including cleft palate and neural tube defects.

The DRIs for folate are expressed as dietary folate equivalents (DFEs), which is an attempt to account for known differences in the bioavailability of folates noted previously. One DFE equals 1 mcg of food folate, which is equal to 0.6 mcg of folic acid consumed with food or 0.5 mcg of synthetic folic acid taken as a supplement on an empty stomach. The DRIs for folate include AIs for infants and RDAs for children and adults. The DRIs for women include increased amounts for women who could become pregnant. Although low folate stores are found in approximately 10% of the population, they are not accompanied by overt signs of deficiency.

Deficiency
Deficiencies of folate result in impaired biosynthesis of DNA and RNA, thus reducing cell division. This is most apparent in rapidly multiplying cells such as red blood cells, leukocytes, epithelial cells of the stomach, intestine, vagina, and uterine cervix. In blood this is characterized by megaloblastic, macrocytic anemia with large, immature erythrocytes that have excessive amounts of hemoglobin. Initial signs of deficiency in humans include nuclear hypersegmentation of circulating polymorphonuclear leukocytes followed by megaloblastic anemia and then general weakness, depression, and polyneuropathy. Dermatologic lesions and poor growth are also symptoms.