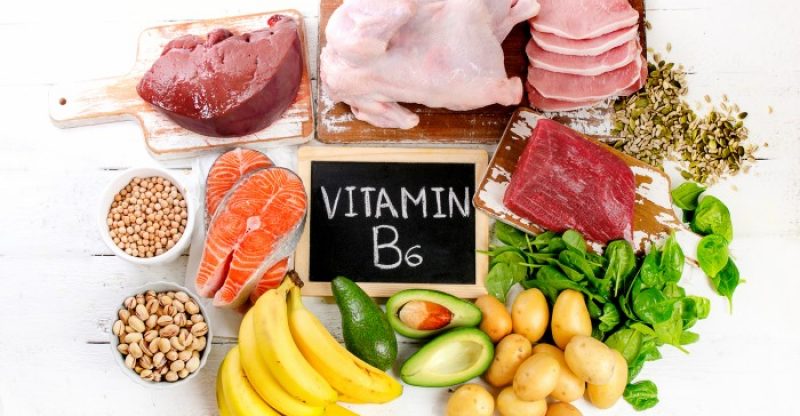 Vitamin B6 is the general term for numerous 2­methyl­3 ,5- dihydroxymethylpyridine derivatives exhibiting the biologic activity of pyridoxine (PN), the alcohol derivative. The biologically active analogs are the aldehyde pyridoxal (PL ( and the amine pyridoxamine (PM). All three compounds are converted to the metabolically active coenzyme form PLP, which is primarily involved in the metabolism of amino acids.

Vitamin B6 is absorbed by passive diffusion of the dephosphorylated forms PN, PL, or PM—primarily in the jejunum and ileum.

The metabolically active form (PLP) is a coenzyme for numerous enzymes in the metabolism of amino acids. Vitamin B6 is needed for the biosynthesis of the neurotransmitters serotonin, epinephrine, norepinephrine, and γ­aminobutyric acid; the vasodilator and gastric secretagogue histamine; and the porphyrin precursors of heme.
The vitamin is also required for the metabolic conversion of tryptophan to niacin, the release of glucose from glycogen, the biosynthesis of sphingolipids in the myelin sheaths of nerve cells, and the modulation of steroid hormone receptors.

Vitamin B6 is widely distributed in foods, occurring in greatest concentrations in meats, whole­grain products (especially wheat), vegetables, and nuts.  Vitamin B6 derived from animal sources tends to have superior bioavailability.

Deficiency
Deprivation of vitamin B6 leads to metabolic abnormalities resulting from insufficient production of PLP. These manifest clinically as dermatologic and neurologic changes such as weakness, sleeplessness, peripheral neuropathies, cheilosis, glossitis, stomatitis, and impaired cell­mediated immunity.