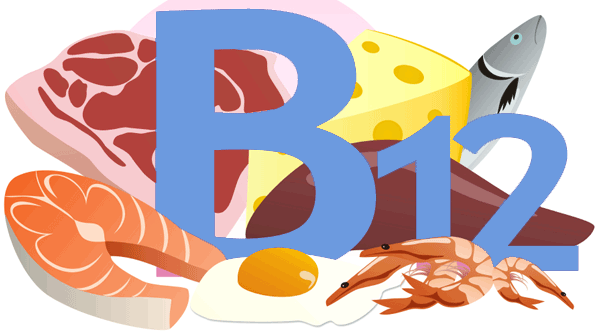 The term vitamin B12 refers to the family of cobalamin compounds containing the porphyrin­like, cobalt­centered corrin nucleus.

Functions
Vitamin B12 functions in two coenzyme forms: adenosylcobalamin (with methylmalonyl­CoA mutase and leucine
mutase) and methylcobalamin (with methionine synthetase). These forms of the vitamin play important roles in the metabolism of propionate, amino acids, and single carbons, respectively. Because these steps are essential for normal metabolism of cells in the GI tract, bone marrow, and nervous tissue.

The richest sources of the vitamin are liver and kidney, milk, eggs, fish, cheese, and muscle meats.

Vitamin B12 deficiency causes impaired cell division, particularly in the rapidly dividing cells of the bone marrow and intestinal mucosa, through arrested synthesis of DNA. The ensuing reduction in mitotic rate results in abnormally large cells and a characteristic megaloblastic anemia. The anemia of B12 deficiency relates to a secondary folate deficiency because of the methyl folate trap. Folate supplementation alleviates the anemia caused by B12 deficiency; however, other symptoms progress unless B12 is provided. Cobalamin deficiency also produces neurologic abnormalities that develop much later than the anemia, with nerve demyelination commencing peripherally and proceeding centrally.

Symptoms include numbness, tingling and burning of the feet, stiffness and generalized weakness of the legs, neurologic disorders including impaired mentation, and depression. If prolonged, deficiency causes permanent nerve damage. Finally, B12 deficiency symptoms may include a waxy, lemon­yellow tint to the skin and eyes; and a smooth, beefy, red tongue. Poor vitamin B12 status occurs from a low dietary intake of the vitamin from animal­source foods and from malabsorption. Deficiency occurs in 15% of seniors older than age 65. Food­bound cobalamin malabsorption is due to gastric atrophy in the older adults, probably as a result of Helicobacter pylori infection. A more common cause of vitamin B12 deficiency is malabsorption because of inadequate production and secretion of IF. Clinically a form of pernicious anemia, it may result from atrophy of gastric parietal cells or autoimmune incapacitation of IF.

Vitamin B12 has no appreciable toxicity.